The Mutiny at Villefranche de Rouergue 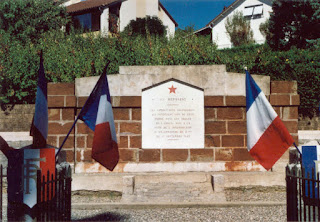 "THEY FELL FAR FROM HOME" Memorial to Bosnians and Croats in Villefranche de Rouergue
.
photo Mitras

VILLEFRANCHE de Rouergue is a small town in the Aveyron valley, in the south of France. In the Summer of 1943 it did not look as though much was going to happen there.

On 14 July the Resistance called demonstrations in Lyons, Grenoble, Marseilles and Montpellier.  Students in Villefranche held a procession to the war memorial and sang the Marseillaise as they passed by the military prison on the other side of the River Aveyron.

The police, torn between subservience to the Vichy regime and uncertainty about the     future, did not intervene. Some of the young people marching that day were later to distinguish themselves as Resistance fighters.

On 25 September, the local weekly newspaper Le Narrateur attacked Allied bombing of French towns; explained that German forces on the Eastern Front were 'regrouping to more defensible lines', and denied that Corsica had been abandoned to the Allies.

It briefly reported the arrest of some "terrorists" on 21 September for the sabotage of mines and electricity pylons in the region, and said cafes in Villefranche de Rouergue had been closed "because of events which had taken place".

These events, which the citizens of Villefranche knew about but the newspaper was not supposed to mention, had so shocked the Nazi occupation regime in fact that after brutally suppressing those involved it wanted the affair quickly forgotten.

The Nazis had suffered a revolt in their own armed forces. Not of Germans, it was true, but of soldiers from the Reich's Balkan empire.

Like any colonial power, Nazi Germany used a policy of 'divide and rule' among its subject peoples. In addition, long-term racial ideology had to contend with pressing military needs when it came to recruitment.

In 1943, Hitler ordered the SS Prinz Eugen Division, mainly ethnic Germans, to raise a new division in Croatia, which under its stooge Ustashe regime had been allowed to incorporate much of Bosnia. Himmler proposed recruiting Bosnian Muslims.

Some Muslim leaders had already approached the German government asking that Croat Ustashe operations on Bosnian soil be stopped, and offering to raise a Muslim force to protect the country. Besides Ustashe attacks, over 2,000 Muslims had been killed by Serb Chetnik forces in eastern Bosnia. Another 9,000 people, mainly old people, women and chidren were massacred in February 1943.


Once Berlin gave the go-ahead for a Muslim division, the Muslims' desire to lay hands on firearms and be trained to use them probably played as much part in recruitment as the visit of the Grand Mufti of Jerusalem, Haj Amin el Husseini, in April 1943, urging a Muslim-German alliance. (The Mufti had been one of the leaders of the 1936-39 Arab revolt in Palestine).

Muslim clergy helped recruitment. The l3th Handzar division as it would be called (after aTurkish dagger) was to have a young mufti attached to each unit for spiritual guidance.

Some 12,000 men were quickly enlisted, most of them more or less volunteers. But disillusionment soon set in. The officers were mostly ethnic Germans - no nonsense about equality. And while many Bosniacs might have hope they were getting a territorial home guard, the force was sent for training in Germany and France, and there were rumours it was being prepared for the Russian front.

Besides, other contenders were starting to attract young Muslims. The new star on the horizon was red. Already some had joined the partisans and seen action against the Axis forces. Could this revolt infect those serving with the enemy?

At the 13th Division training headquarters near Dresden, discontented soldiers gathered around 25-year old Ferid Dzanic from Bihac. Dzanic had studied railway engineering at Belgrade, been called up to the Yugoslav army in 1941, then joined the partisans in the Autumn of 1942, becoming political commissar of his battalion. Captured in an ambush in March 1943, and sent to a prison camp near Sarajevo, Djanic evidently persuaded his captors to release him, and perhaps his railway engineering skills helped, to as they thought, serve their side.

Djanic confided his ideas for revolt to Bozo Jelinek, a 23-year old Croat from Slavolina.  Jelinek had been imprisoned for Communist Party membersip in Zagreb in 1941. After his release the party sent him on a mission to Zenica, from where in 1943 he was taken into the army and sent to Dresden.

There was unrest among both Bosnians and Croats, some conscripted against their will, at having to do navvying work for the Germans, and at Nazi racism and ill-treatment.

When Bosnians and a unit of Croat sappers were sent to Villefranche de Rouergue in August for further training, Djanic and Jelinek were joined on the train by 19-year-old sub-lieutenant Nikola Vukelic, originally from Gospic in western Croatia. He'd written home to say he'd "had enough of Dresden, and of Germany". `


In Villefranche, through the good offices of Maurice Delclaux, restaurant manager of the Hotel Moderne, the conspirators were put in touch with an officer of the Resistance.


There was already at least one Yugoslav, Milan Ralafatic, alias 'Fernand', and a Brazilian, Apolino de Carvalho ('Edmond') who had fought in Spain, leading underground fighters in the region.

On the night of 16-17 September the mutineers struck. At ten past midnight, Lieutenant Kirschbaum the battalion commander was taken prisoner, and along with other officers, brought before a rebel tribunal, condemned to death and shot.

A Colonel Eck was only wounded, and managed to get away. Sub-Lieutenant Schweiger a medical officer from Carniola persuaded the rebels that he was a compatriot, and that they should let him go. he was able to raise the alarm and come back with loyal Nazi troops.

By 4 am the rebels had taken over the gendarmerie post and railway station.  Some 200 armed themselves and made off for the country. Others hesitated, not speaking the French language or knowing the local terrain. Shots could be heard.

Hodja Halim Malhe, the muslim chaplain, urged the soldiers to give up their rebellion and surrender to the Germans. Mutineers burned the battalion's papers, so reprisals could not be taken against their families.

Villefranche's mayor, Jean Baudin, had been woken by shots. H elooked out to see a detachment of troops led by an SS corporal who shouted "The communists have attacked us!"

Schweiger, clutching a sub-machine gun, and highly agitated, said he must announce a state of siege. Baudin reminded him that he was only a doctor, not a military commander, and said only German officers were qualified to call a siege. Schweiger ran to 'phone frantically for a German officer.

Dzanic took a group of 40 men and tried to break hrough the German forces now encircling Villefranche.At the Haut-Guyenne roundabout he was killed in  a gun-battle. In the town centre Vukelic was wounded. He was later captured, and after three days of torture by the SS he was shot.

German reinforcements arrived. Guided by a Vichy military police man, SS units moved into the narrow streets of the old part of town, where some of the mutineers had spread out, hoping to hide and make for the countryside later.

Grenades and machine guns were used, as the Yugoslavs, though short of ammunition, would not give themselves up easily. By late afternoon there 30 or 40 bodies in the streets. The manhunt for escaped Yugoslavs went on for a week. As well as the town, SS units with armoured machine gun carriers scoured surrounding villages and fields. Over a 100 of those recaptured were executed, lined up before a pit and machine-gunned.

Many rebels were helped to get away by local people, and joined the Resistance. Marie Regoud, an elderly widow, saw a man hiding behind a pile of logs under the railway bridge near her home.
There was an SS guard at the other side of the bridge. Mme Regoud made a sign to the fugitive, and came back past the SS man with some old clothes in her shopping basket. She stood watch while the Croat got changed, shoved his uniform in her basket, then returned home past the SS guard, delighted that she had got one over the Nazis.

Mlle Plo, a bank clerk, and her neighbour, M.Vidal, hid a man in the attic for three days, obtaining clothes for him. After consulting the priest they moved their man to the church belfry, where she continued taking food, and M.Vidal slipped him some tobacco.

About a week later, a nearby farmer was aske if he could use a labourer. A couple of months later, with new clothes and papers, Bozo Jelinek was taken to Toulouse. As 'Lieutenant Leopold' he earned a Croix de Guerre with the French maquis.

On 18 September proclaiming martial law and a curfew in Villefranche, the Nazis took the mayor to look at the bodies of the German officers. They voiced suspicion that "the niggers"-North African soldiers in the local hospital - were accomplices of their fellow-Muslims.

They took away the manager and staff of the Hotel Moderne for interrogation and torture at Montpelier. The SS ransacked homes.

It became a matter of pride for the people of Villefranche that in those hard times, they had fed and clothed the rebels, and that nobody was betrayed. Local historian Louis Erignac adds that the events made them aware of "the community of combat between different peoples". *

At the end of 1944, with 600 compatriots, Jelinek arrived back in Yugoslavia to join the partisans.